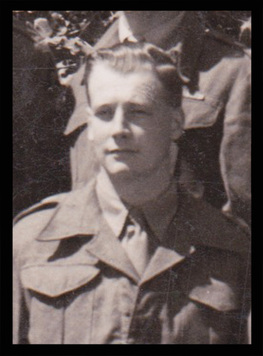 It is with profound sadness that we report the passing of Captain John Perret, who joined The Suffolk Regiment on 28th June 1944 and served with them throughout the campaign in North West Europe.
John was originally from Takely, Essex and worked with a large insurance company in the City.  He was conscripted at the age of 20 in 1940, but following his medical, it was decreed that he had 'flat feet' and would thus, not be eligible for joining the infantry. He was instead, posted in 1942 to a detachment of the Pioneer Corps, then attached to the Essex Regiment, who were on coastal duties at Leiston in Suffolk.
It was during his time at Leiston that he met his future wife, Jane, with whom he kept in contact via letters. He would return to marry her after the war had ended.
Despite his medical condition, John would be commissioned into Oxfordshire and Buckinghamshire Light Infantry in 1944. After a brief posting to the Highland Light Infantry in Scotland, he crossed to France on D+20, joining them in Normandy.
Following the costly attack on the Chateau de la Londe on 28th June 1944, John, along with three other Ox and Bucks officers, were transferred to the 1st Battalion, The Suffolk Regiment. It was here that he was to remain until he was demobbed in 1947. 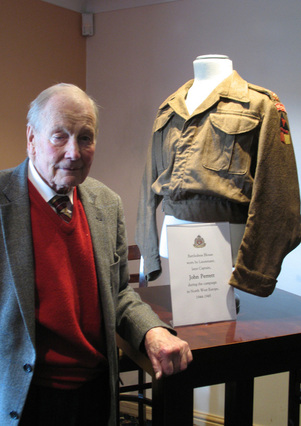 John was wounded during the campaign in North-West Europe in November 1944, near the Dutch town of Goch, when in command of a platoon of D Company, he received multiple shrapnel wounds during a heavy enemy artillery barrage. He suffered several times during his post-war life to unknown blood related inflections. It was only in 1950 that it was discovered that he had several shards of shrapnel still lodged in his spine.
John finished the War in Bremen, where after being kitted out with US Army uniform and equipment for the final assault on Japan, the atomic bombs were dropped, thus ending the war in the Far East. The 3rd (British) Infantry Division of which 1/Suffolk were part, were sent instead to Palestine to support the last days of the British Mandate there. It was here in 1946 that John and two fellow Suffolk officers were confirmed in St. George’s Cathedral in Jerusalem. John left The Suffolk Regiment in 1947. He returned to Leiston to marry Jane and returned to his pre-war City life in Insurance.
He had a deep love of Suffolk and its people, and nowhere more so, than the town of Leiston, which became is home for the next 67 years. In his retirement, he formed a group of local volunteers together to start a town museum. This small endeavour was to grow into the world-famous Long Shop museum which thrives to this day; an achievement solely due to John and his early endeavours.
He was an early supporter of the Friends and did much in our early days to help bolster our membership. It was a privilege to be invited to his 90th Birthday in 2010 and to reunite him with the battledress blouse he wore whilst serving with 1/Suffolk in 1944. A modest and most unassuming man, he was always immensely proud of The Suffolk Regiment and did all that he could to ensure that it's honoured name was upheld. He was a loyal supporter of his local branch of the Old Comrades Association, even giving over his house and garden to the inhabitants of Leiston to hold a fundraising fete to bolster branch funds.

An officer, historian and true English gentleman. We will not see his like again.