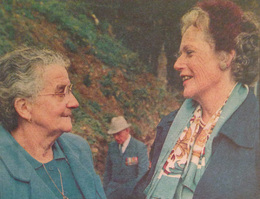 In June 1988 following the second official Suffolk Regiment visit to Normandy, the owner of the bunker complex codenamed 'Hillman' - which was taken by 1/Suffolk on the evening of 6th June 1944, offered the site to The Suffolk Regiment as a tribute to the men of the Battalion who fell that day.
Madame Suzanne Lenauld who owned the land upon which the bunker stood, and who had been a young girl at the time of the liberation of Normandy, gave the land to the Regiment. Thus uniquely, The Suffolk Regiment owned the piece of land they had fought so hard to obtain 44 years before.
Initially, a 'Hillman' committee was formed consisting of four distinguished officers who were there when the bunker was taken. Lieutenant-Colonel Eric Lummis (Reinforcement Company), Major Hugh Merriam (Adjutant), Captain Frank Matthews (B Company) and Captain Arthur Heal (R.E.) agreed that following Madame Lenauld's generous gift, a dual-language memorial should be erected as soon as possible telling the story of what happened there in 1944.
Shortly afterwards however, the Regiment learned that Madame Lenauld's generous gift would render her family liable to a hefty French gift tax of over 60%. In a gesture of good faith, the Regiment agreed to pay a nominal 10 francs per square meter for the site. After the cheque was delivered, Madame Lenauld gave a donation for exactly the same amount towards the Hillman memorial. In due course on the 7th June 1989, a memorial was formally dedicated at the Hillman bunker.
In parallel to the handover of Hillman, a group of dedicated volunteers emerged in Normandy who were trying to clear the bunker site and make it available for the public to visit. What emerged was 'Les Amis du Suffolk Regiment' - The Friends of The Suffolk Regiment.
Since 1990, they have made great advances in getting the bunker site into a safe condition where the public can come and view its cavernous interior. They have restored many of the underground rooms to exactly as they were in 1944 and have replicated several of the heavy steel cupolas which festooned the site in 1944. They open the site up all throughout the summer months for the public to visit and have been generous hosts to the Regiment and the Friends on more than one occasion.
As the surviving ranks of the Regiment dwindle and the yearly pilgrimages fade, new rejuvenated links are now being forged with our French cousins. The Regimental newsletter noted in 1990 after Hillman was officially given to them that "The Suffolk Regiment will run tours until 60th anniversary, then after that who knows!"
The Friends and Les Amis will endeavour to continue this tradition of comradeship and friendship, for as long as possible.

For more information, please visit their website at: http://www.amis-du-suffolk-rgt.com
Top: Bill Orton, a 1/Suffolk D-Day man in conversation with Monsieur de Formingne de la Londe, whose chateau the Battalion fought bitterly to obtain. Above: Madame Lenauld in conversation with lady Anthea Goodwin, the widow of Lieutenant-General Sir Richard Goodwin, who commanded the 1st Battalion on D-Day.