In Defense of Something That Really Matters:
The Suffolk Regiment Museum
​ 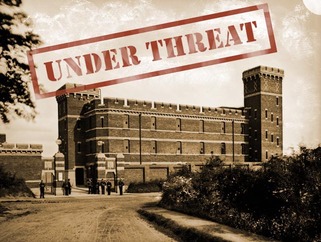 With recent defence cuts, it looks ever likely that one day our descendant regiment may have to leave their HQ and move elsewhere. If this were the case, what would happen to our beloved Regimental Museum? There are already thoughts that a potential move into the centre of Bury St. Edmunds would be possible. What would this bring for the future of the United Kingdom’s only untouched “old style” Regimental Museum?
In the 8th decade of it's existence, to illustrate exactly how important the museum is, Friend Ian Hook - Keeper of The Essex Regiment Museum at Chelmsford, wrote in a previous edition of Castle & Key, the following article which illustrates just how important our Regimental Museum is and why we should do all in our power to keep it in it's current location and condition. Ian's article is reproduced in full below:

For some of us old enough to remember the Sixties (though not old enough to remember the Suffolk Regiment) there began a habit that has proved very hard to break. Not one of hallucogenic substances, free love and the Beatles but a liking for hallowed places, time regarded relics and an atmosphere of pride and care. Although we had no part in the making and collecting of these things in these places they still matter deeply to us.
This habit, perhaps an addiction, began as a leisure pursuit but for me has grown in strength to become a daily pleasure and, ultimately, a profession, or at least a way of life. In case this piece smacks of the confessional and sociological mumbo-jumbo it should speedily be explained that the habit is one of visiting Regimental Museums. In the days of my youth these Museums were much more “Immediate”, as a careful young lad might be allowed to handle German Machine Guns, sight Japanese Howitzers and work Lee-Enfield bolts on family holidays and days out. Chief among favoured destinations, if the choice was left to me, was the Suffolk Regiment Museum at Bury St.Edmunds.
This venue had everything a young historian might desire - an imposing building simply oozing with atmosphere. A wide and varied collection with always something new to spot and never allowing the sensation (so common today) that despite the promise of the marketing the visitor is short-changed. Every one of these items told a story and this was often reinforced by an old soldier (Mr Calver, Mr Easlea and Charlie Shropshire if I recall correctly, familiarity of name in the latter perhaps a function of advancing adulthood!). I have returned many, many times and despite my interest becoming a 28 year curatorial career in Army Museums, the magic of the Keep and the Suffolk Regiment Museum remains.
This time span has seen many Regimental Museums, for all sorts of reasons, come out from behind the wire, often into the care of Local authorities. While some good things have come from this, it has had a fatal effect on the atmosphere of these Museums. Give a Regiment Museum to a Museum professional and pretty soon it will be in the hands of a designer who knows not a bayonet from a button stick. With the mantra that “the new Museum will not be a shrine to the objects” the bulk of collections will be relegated to store (or sold) and replaced with huge photographs, crass captionage in large letters and the intellectual consistency of bubble gum.
Where all this leads is that almost by sundry accidents of history, few Regimental Museums retain the crucial cocktail of atmosphere, artefacts, pride and force of history as the Suffolks. Possibly only the King’s Own Scottish Borderers at Berwick Castle (also at their former Depot) can compare and so these two remain “Sites of Special Scientific Interest”. It would be foolish man who destroyed the Keep and its unique atmosphere which present not only the pride of the Suffolks but represent the Regimental Museum projects that grew up in the wake of the Boer and 1914-18 wars. In Moyse’s Hall we have Suffolk Regiment Museum Lite. Let us ensure that no Museum professional in unholy alliance with the slickly presenting designer from some “Solutions” or “Partnership” company is allowed to water down the time honoured good strong English real ale brew that is our Suffolk Regiment Museum. Stonehenge was very nearly knocked down to build an airfield in 1911.

Please go along and visit the museum to decide for yourself. We are sure that you will agree with Ian's (and our) sentiments. We look forward to receiving any feedback you may have (via the contact page of this website). Opening days and times can be found on the Regimental Museum page of this website.