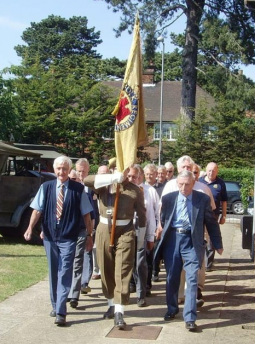 The Suffolk Regiment Old Comrades Association was formed in 1908. The idea stemmed from a proposal that had been discussed at a meeting of the Sergeants Dinner Club the previous year.
In an age with no welfare state, it was felt that an organisation should be created to ensure that former members of the Regiment could remain in contact with one another, and for those members who had fallen on hard times, benevolence and assistance could be administered. From that day to this, the Association's by-words have always been "comradeship and caring."
Membership was large from the outset. For those still serving, enrolment was automatic upon leaving the Regiment. The duty clerk would deduct the membership fee from your final day's pay, issue you with a membership card and give you a small white box which contained a handsome gilt and blue enamel lapel badge. Some men would never go to a meeting again, but most remained regular members for life.
In it's early years, it was an exclusive association. The Territorial Force were not eligible for membership and was not until the 1920s that membership was rightly extended to them. At its height in the 1950s, The Old Comrades Association had over fifteen branches in many parts of the country. Besides the major towns in the county; Bury St. Edmunds, Ipswich, Beccles, Sudbury and Mildenhall, branches were also started in Southend, Plymouth and London. In more recent memory, branches have been started in Lowestoft, Stowmarket and Hemel Hempstead.
At Hemel Hempstead in the mid 1990s, a major recruiting drive was conducted resulting in over two hundred new members being recruited, many being former National Serviceman, and to this day, Hemel Hempstead has the largest number of members of all the branches of the Old Comrades Association.

Today, the Old Comrades Association struggles on through turbulent times. As the old soldiers gradually disappear and the ranks gently dwindle, the Regimental spirit, still strong, lives on. The Friends are hugely supportive of the Old Comrades Association and we work together to ensure that their ranks are given every possible form of support available to them. Be it in welfare or in voice, the Friends will always support the boys of the 'Old Dozen.'