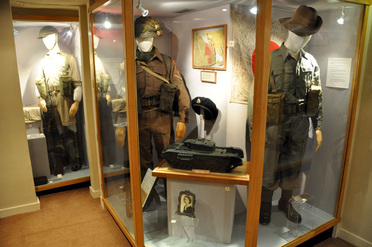 Back in 1999, when it looked like our splendid Regimental Museum at The Keep was to be permanently closed and its treasures put into long term storage, St. Edmundsbury council, offered the Regiment, a small gallery upstairs in the town's main museum: Moyses Hall, to display less than a 5th of the museum's amazing artefacts. Thus in early 2000, the Regimental Gallery was opened to display a brief overview of the history of the Suffolk Regiment to the public.
The Gallery, situated upstairs in Moyses Hall, tells in display cases, the highlights from the Regiment's 274 years of history. A video, depicting the life of "Private Catchpole" and the many campaigns he served in from Minden to Malaya, runs as you enter the gallery, whilst in the display cases, figures dressed in original uniforms, depict most of the major campaigns fought by the Regiment in the 20th Century; the Boer War, First World War (Western Front and Mesopotamia), Second World War (Singapore, the Arakan and D-Day) and Malaya. In the cases with these figures, are other regimental artefacts associated to the figures period. 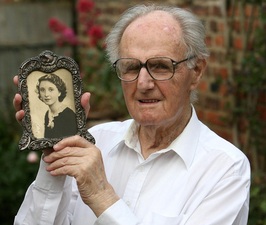 Amazing items such as the Keys to Gibraltar, given after the Great Siege, along with the 'Stabilis' Colour; a 6ft. King's Colour which may have been carried at the battle of Minden in 1759. Here too can be seen the only known surviving copy of the billboard from the 'Singapore Straits Times' in 1952 entitled "Suffolks Do It Again"
Other amazing items displayed include, the charred remains of the Company pennant that was rescued from the burning hull of Major Birkbeck's flaming Churchill tank in North Africa, the silver photo frame which stopped a bullet for Friend Charles Trueman (right), and a letter sent by Suffolk PoW, Ray Walker to his wife that arrived 50 years late!
Along one wall, is a complete 'nut and bolt' display of every single piece of National Service Suffolk soldiers uniform and equipment; from his socks to his PT vest.
A small display of the medals of some of the most important figures in the Regiment's History are displayed here along with the individual campaign medals that were issued one per Regiment (for the battles of Gibraltar and Seringapatam), before individual medals were instigated. Here too, are mounted, replica medal groups to the Regiment's two Victoria Cross winners; Sergeant Arthur Saunders and Corporal Sidney Day; both won during the Great War.

Happily, for future generations of regimental historians, the Regimental Museum never closed it doors to the public and the remainder of our historical legacy, remains there for everybody to enjoy. It is here, at The Keep, that the visitor will get a much fuller history of the Suffolk Regiment.
Main Picture: A sergeant of the Cambridgeshire Regiment demonstrates a new set of equipment they had purchased: 1909.  Photograph above of the gallery, courtesy of the St. Edmundsbury Chronicle website, and right, from the family of the late Charles Trueman.