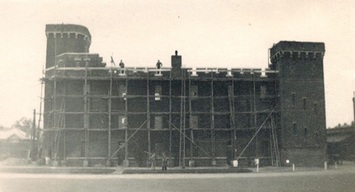 The Suffolk Regiment Museum is unique. It is one of only two regimental museum's in the United Kingdom that still survive housed in their original buildings, however it is only The Suffolk Regiment Museum that remains virtually untouched.
The origins of the Regimental Museum can be traced back as far as 1935 when, The Regiment decided as part of its 250th anniversary celebrations, to begin a Museum. Originally housed in the Officer's Mess with less than 200 exhibits, in the late 1960s it moved to the second floor of the Keep (formally the Reservist's Clothing & Equipment Store), where it has remained ever since. The top floor of The Keep is today, The Regimental Headquarters of The Royal Anglian Regiment.
Within it's walls, rests a unique archive to the men who served with the Regiment. From cannon balls fired at Seringapatam, to maps showing the enemy positions that faced them on D-Day, to Malayan Bandit blowpipes, nearly every period of the Regiment's campaigning can be seen on display.
Hanging too from the roof, are many flags of Regimental significance. From an Imperial German flag captured from the German Embassy in Togoland on 5th August 1914 (almost certainly the first 'Action' of The Great War) to the last Depot flag flown at Gibraltar Barracks, which superimposed a Royal Norfolk Regiment Britannia against a Suffolk Regiment castle, each one has an amazing story to tell.
Uniforms and equipment of the Suffolk Soldier are also displayed, along with an impressive collection of Regimental Silver and Drums. Other items include a fine array of weaponry carried by the Suffolk soldier since 1800, along with many hundreds of other fascinating artefacts such as PoW escape maps, Colour Belts and even a Regimental teddy bear. The museum too houses an impressive Medal collection, dating back as far as the Great Siege of Gibraltar (1779-83) which is displayed downstairs.
Other such amazing items on display are a Burberry raincoat "holed by a whiff of shrapnel as I left my dugout in the brick kiln, St. Jean" - formerly the property of a Great War Suffolk officer, and "A piece of the tree under which Sir Thomas Picton fell" - Sir Thomas having started his career in the 12th Regiment, later fell at Waterloo.
Since our earliest days, the Friends have worked closely with the museum and many of our members have become museum volunteers. In short, this unique untouched place is an absolute gem. A gem which should be treasured and preserved in it's current condition and in it's current location at all costs.

Only by visiting will you see just how amazing it is and we urge you all to do so. The museum is open every Wednesday from 9.30am to 3.30pm, and the first Sunday of each month.
Above: The last Minden Day Parade of The Suffolk Regiment. Brigadier R.H.Maxwell, Colonel of the Regiment inspects the last draft of National Servicemen before they were to proceed to Germany for amalgamation with 1/Royal Norfolk Regiment. Below: Contractors clean ivy from the Keep; the present home of the museum in the mid 1930s. Photograph courtesy Gwyn Thomas.