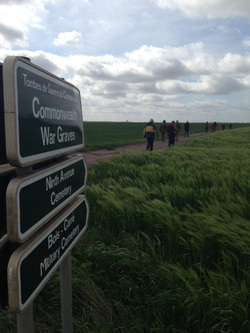 Early on the 8th May 2015, a combined group of Friends and Suffolk Western Front Association members departed for a three day tour to visit the 1915 Suffolk Regiment battlefields of 1915.

After a delayed start at the tunnel, we arrived in the Ypres Salient just after lunch. Stopping on the way to visit the graves of Second Lieutenant Hugh Bertram Neely, a young officer of the 1st Battalion killed on 25th April 1915, and Louis Marie Joseph Vital Danzanvilliers who was killed whilst serving with the 12th Battalion. Taff recounted the story of the ‘Frenchman’ and his early life in Summerstown in London where he is commemorated.
Onwards we travelled to the Frezenberg Ridge to the spot where one hundred years ago that day, 1st Suffolks made an heroic stand in the face of vastly superior enemy forces. We heard of the background to the actions that day and of how 1st Suffolk had been depleted of many of their best officers and NCOs for other Battalions at the front and of how in the early months of 1915, they had suffered greatly to enemy action. They had at the time of the attack been less than 500 all ranks by the end of the action, there would be just 3 officers and 27 other ranks remaining.
We heard Signaller Harry Clarkes account of the terrific bombardment that severely wounded the Battalion Commander, Lieutenant-Colonel W.B. Wallace and injured the Adjutant D.V.M. Balders. Wallace was captured and became a Prisoner of War. bladders survived and went on to greater things.
After a quick beer in Zonnebeke, we journey into Ypres to have dinner after which we attended the daily service of commemoration at the Menin Gate - the Commonwealth Memorial to the Missing of the Ypres Salient. A special treat was in store for us here as also celebrating the centenary of the battles that day at Frezenberg, were two detachments and Colour Party of the Princess Patricia’s Canadian Light Infantry, who had travelled especially from Canada to attend the service. A wreath was laid in remembrance to those of the Regiment who 100 years ago, halted the German advance in the Second Battle of Ypres.
From here we travelled southwards to our hotel near Bethune passing the Christmas Truce Memorial Cross on the way at St. Yvon. Getting to our hotel just before 10.00pm, we were all pleased to have a rest after a long, but fascinating day. 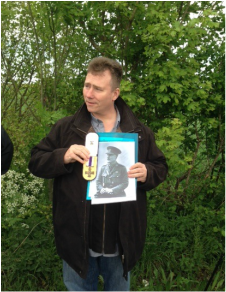 The second day started with an early start as we headed to the battlefields of Loos. Our first stop was to St. Mary's Advanced Dressing Station Cemetery before we walked down the track beyond it towards the original position of the 'Lone Tree.' Here we learnt of the background of the 9th Battalion and of how they were formed at Shoreham and suffered greatly in the bad weather of late 1914. We heard of how exhausted, they arrived on the battlefield just two days before they were forced into action on the 28th September 1915. We used our minibus to trace the line of advance of the Battalion that morning. Using a farm track that was there at the time, we followed the route they took which as the battle developed, veered much further south than it should have. We arrived at the Lens-Loos road; the furthermost point of the Suffolk advance that day, where we heard of the action which would win an already wounded Sergeant A.F. Saunders, the Victoria Cross. We heard here too of how after the retirement commenced, how Captain C.T. Packard won the Military Cross for getting the Battalion back to their start line that day.
Back in the bus, we ventured north to the site of Hohenzollern redoubt where 1st Suffolk, still weak from their experiences in the Salient the previous May, were pushed into the attack on the night of the 2/3rd October without proper organisation. After difficulties getting up to the front line, and refused requests to delay the attack, they were thrown in to a disastrous attack from which they were forced to retire shortly afterwards. Despite many attempts, the position would never be taken. 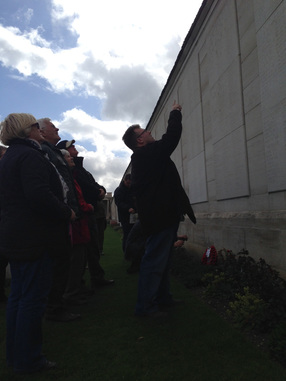 After a leisurely lunch in Loos, we ventured out to the Quarries and the area known as the "Hair-pin" where 7th Suffolks had a baptism of fire in mid October 1915. We heard of the Battalion orders that were issued to try and reconnect two angular trenches that stretched almost to the German front line. We traced the steps of the bombers - who were pivotal in the success of the attack, and of how Captain Cobbold on the northern trench, and Captain Currey on the southern trench, were both killed in the opening phase of the attack. On the southern side of the hairpin we heard of the second attack that went in that claimed the life of Captain Charles Hamilton Sorley, whose collection of poetry was discovered in his kit after his death during the action. With the aid of two walking sticks, we explained the action and of how Lieutenant Deighton rescued command in the midst of the battle and linked the two spurs of the recently captured hairpin together and won himself the Military Cross for his actions.
The final stop of the day was to the Commonwealth Memorial to the missing at "Dud Corner" where Friends member Dennis Francis laid a wreath on behalf of those on the tour. We visited the Suffolk panel that contained the names of those who feel in the Loos battles of 1915 that have no known grave. From the vantage point above the cemetery, we could see the entire battlefield and view where we had been that day in relation to the overall battle.
We called in briefly to the 'lone' cherry tree in the middle of the battlefield - replanted in the 1990s near the spot of the original which had died in the 1960s. From here it was a short drive to our hotel to freshen up before we ventured out for dinner at the nearby 'Crocodile' restaurant. After an unlimited buffet and masses of beer, we all went to bed for a good nights sleep, ready for the final day of the tour which would visit Neuve Chapelle in the north.
The final day saw us after a leisurely breakfast, journey back via Neuve Chapelle to the scene of the 4th Battalions battle in March 1915. Starting at 'Windy Corner' we walked along from the Rue de Berceaux to the spot where the orchard was situated where the battalion formed up before the main attack. From here we went south to Port Arthur where the imposing Indian Memorial is now situated.
Here at the furthermost point of advance for the British, we stood at the spot where 100 years ago, a conference of officers was called in a shell hole before the attack. We heard and saw of the exposed positions that faced 4th Suffolk that day and of how the deeply entrenched artillery in front of the Bois du Biez; the Battalions objective, had a clear view across to Windy Corner and beyond.
After seeing how the attack faired for 4th Suffolk, we visited briefly the Indian Memorial before driving north towards Armentiers to visit in Pont du Hem cemetery, the grave of 2/Lieutenant Harry Akers Row from Bramford near Ipswich. Row was killed at Neuve Chapelle along with fellow Suffolk officer, Stephen Garrett. A fine and fitting end to three days of pleasurable touring. By early afternoon, we were on our train home and back in 'Blighty' at a reasonable hour.
The tour seemed to have been quite a success and plans are already afoot to continue with our series of tours next year, perhaps visiting the later battles of the Somme campaign.
Powered by