The Friends is a global 'umbrella' of an organisation which includes members worldwide. Members are interested in many periods and campaigns of the Regiment's history and  contribute regularly to our publications.
The day-to-day running of the Friends, the collation of its magazines and the organisation and running of its battlefield tours, is run by a dedicated pair of volunteers, passionate about the history of the Suffolk Regiment. You can find out more about them here:
​ 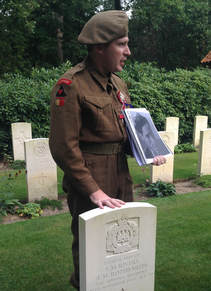 With a great passion in military history from an early age, Mark's interest in the Suffolk Regiment comes from his grandfather who served in the 4th Battalion and was taken prisoner at Singapore in 1942.
Like most Far East Prisoners of War, his grandfather seldom spoke of his experiences, which urged Mark to research his service with the Regiment and find out more about his Battalion. This brought him into contact with the Ipswich Branch of the Suffolk Regiment Old Comrades Association, where he learnt more and met Taff in 1999. The rest as they say, is history.
A loyal attendee, Mark has since 2003, carried the Branch Standard at remembrance services and events both here and on the continent. Together with Taff, he has been closely involved with both the Old Comrades Association and the Suffolk Regiment Museum, where he volunteers (family permitting!) as often as he can.
Since the formation of the Friends, Mark has undertook the role of Membership Secretary and Website Editor. In the last five years, he had also taken on the role of producing the Friends magazines as well.
A passionate regimental historian, he takes great pride in what the Friends have achieved and has campaigned vigorously to ensure that its Colours and its Memorials have been preserved for future generations of regimental historians. 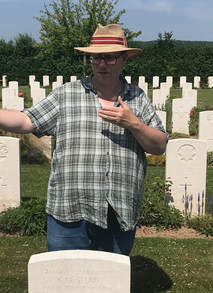 With an huge interest in British Military history since his teens, Taff's interest in the Suffolk Regiment comes from his uncle, who completed his National Service with the 1st Battalion in Cyprus. His involvement with the Suffolk Regiment began in the late 1980s when he became involved with the Ipswich Branch of the Old Comrades Association, of which he later became Chairman.
Taff carried the Branch Standard and accompanied its members on many pilgrimages to both Normandy and to Holland. Taff has had the honour to be a Trustee of the Suffolk Regiment Museum, and assisted them in the production of a small volume of Regimental History with the late Eric Lummis, the creation of the Regimental Gallery at Moyses Hall in 1999, and the re-organisation of the Regimental Museum in 2004.
Co-author of the book "The Old Dozen - A Century of Photographs," he has been most active in ensuring that Ipswich War Memorial had the names of the fallen of the Second World War added to it in 2005, and that last year, that a memorial to Sidney Day VC was finally erected in his hometown of Norwich.
​It was Taff's idea that the Friends should be formed and today, ten years on, his unique passion for the history of his county Regiment has ensured that it has remained in the public eye much longer than many of its contemporaries, who have since faded into history.
​
Main Picture: A squad of new recruit at Gibraltar Barracks, 1953. Seated in the centre is the Depot Commander, Major Johny Calder.