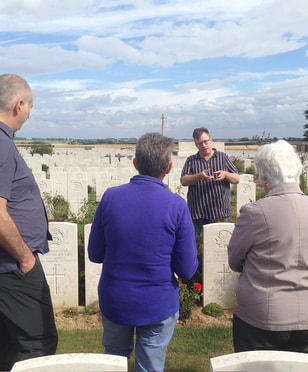 Continuing with our series of centennial battlefield tours to the actions of the Suffolk Regiment on the Western Front, September 2016, saw a mixed group of Suffolk Branch, Western Front Association members and Friends, journeying to Picardy to retrace the actions of the Suffolk Regiment on the Somme.
Following on from our previous tours (Le Cateau in 2014, Loos, Neuve Chapelle and Frezenberg in 2015), this time we were to retrace the actions of the six Battalions of The Suffolk Regiment that served during the Somme campaign between 1st July and 18th November 1916.
After a cold and misty start, the party arrived on the Somme on the 16th September, for its first stand of the tour; the battle exactly 100 years ago to take the German strong-point known as the “Quadrilateral.”
It was here on 15th September 1916 that the 9th Battalion fought gallantly to try to take the position. They had already tried to take the position two days earlier, without success. On the 15th, a spirited attack got to within close enough distance to “lob bombs in” but they could not overcome the fortification. Here we heard of the gallant deeds of Lieutenant Ensor; an Ipswich accountant who was to rescue his comrade and win himself the Military Cross, and of the Battalion Commander Lieutenant-Colonel A.P. Mack, who was killed going forward to see what could be done to push the attack forward. 196 men were lost that day, with countless more ‘missing.’
We walked the ground that 9th Suffolk had to cover that day. From the ‘sandpits’ at Guinchy, across the vast expanse of open territory, at a slight incline, to the site of the “Quadrilateral” on the ground in front. Only now with the ground devoid of barbed wire and shell holes, can one appreciate what a tough objective it was for the Battalion.
From here it was just a short journey to Guillemont Road Cemetery, to visit the grave of Colonel Mack, where he lies within yards of Lieutenant Raymond Asquith; the son of the then Prime Minister.
Back into the transport for a short journey westwards, to a seldom visited part of the Somme battlefield. Here at Le Transloy, using the marvels of modern GPS, we located “Bayonet Trench” where on 12th October, 7th Suffolk suffered a “calamitous day” with the loss of over 500 casualties. Deadly machine-gun fire on the flanks, uncut barbed wire and misty conditions, meant that chaos ensued for the men advancing that day. They were cut to pieces as they tried to advance up the valley from their trench. Every officer in the attacking wave that day became a casualty.
This, the end of the first day, saw us in the ancient town of Peronne, enjoying a beer in a slight drizzle before our restaurant opened. Our meal was excellent and proved just too much for most of us! So after a short drive to our hotel, we were ready to sleep, and be ready for another full day in the morning. 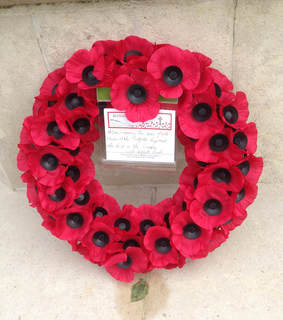 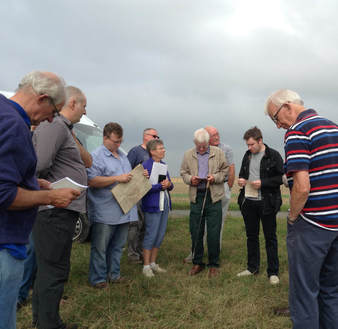 The final day, saw a leisurely start from the hotel, heading towards La Boiselle to follow the advance of the 11th battalion, Suffolk Regiment; the Cambs Suffolks. Here deep in “Sausage Valley,” we gained our position using the original trench map of Lieutenant Gilbert Hattersley of 11th Suffolk which was carried on 1st July 1916 as the Battalion advanced. From this we were, with the aid of Tony’s compass, able to walk the route of their advance that day. From the centre of the valley, with the “Glory Hole” to our left, we walked forward to the right of the famous “Lochnagar Crater” following step-by-step the line of their advance.
We heard of the disastrous fate that befell them that day, with the highest casualties of any Battalion in their Division being incurred by the Cambs Suffolks. On the way back to the bus we came across some rather nasty, unexploded German ordnance on our walk which was best left there!
As the weather closed in, rain-proofs were donned as the heavens opened. Time to get back into the van and cross the Bapaume road, to visit Ovillers Cemetery where some of the Cambs Suffolks are buried. Passing the site of “Keats Redan” named after Lieutenant Keats of 8th Suffolk who captured it in early 1916, we arrived at the cemetery as the sun began to shine once more.
Here we heard of the attack on 3rd July by the 7th Battalion, and of how they were extremely successful in gaining not only the German front line, but the second as well. But, with the speed of their advance, came difficulties, with it being impossible to bring reserves up to assist them. As the Germans managed to get back into their trenches, they enfiladed the forward Suffolk positions from all sides, causing a great many casualties and forcing what was left of the Battalion to retire. Here too, we sought out the grave of Private Bone from Snape, killed here on 3rd July with 7th Suffolk. We placed a memorial cross at his grave for his descendants who have recently become Friends members. Lunch found us in the aptly named “Old Blighty” tea rooms at La Boiselle for a sandwich and a cup of tea, before journeying to our final stop on the tour, the tiny, but moving “Luke Copse” cemetery, at Serre where along with a few York and Lancs, the cemetery is almost exclusively Suffolk soldiers, killed on 13th November 1916 in the ill-fated attack on the German front line at Serre.
Here we heard of the second action that 2nd Suffolk were to fight on the Somme which was to prove costly to the Battalion. In awful weather conditions, the Battalion was forced on 13th November to attack over muddy, waterlogged ground the German positions opposite then in front of Serre. Though progress was made, and the first belt of enemy barbed wire were cut by the artillery, the second line was of a new type which could not be cut by the cutters the Battalion had at that time. With every officer killed or wounded, the C.O., Colonel Stubbs, went forward to find out what was happening. Men were soon flocking back to the waterlogged British trenches telling that they attack had been a disaster. In the years that were to follow, 2nd Suffolk veterans talked of this being the worst battle they fought during the war.
Here we heard in the peaceful surroundings of the cemetery, the story of one York and Lancaster Regiment man buried there. Richard Carding-Wells was an original member of the Sheffield City Battalion when it was formed in 1914. Here Kelvin laid our wreath; a fitting end to the tour.
So in our short trip to the Somme, we had covered the actions of the 2nd, the 4th, the 7th, the 8th, the 9th and 11th Battalions of the Suffolk Regiment and the battles that they fought there one hundred years ago.
We had seen tragedy, triumph, failure and success in the various battles we heard of. It should however be noted that it was here on the Somme that the British Army learnt to fight a modern war and inflicted a blow upon the German Armies from which they never recovered. By the middle of November 1916, the Germans has already decided that they would soon need to retire back behind their vast defensive bulwark, known as the “Hindenburg Line.”
Next year, the Friends plan to visit the battles of either Arras or Cambrai to follow the actions of the Regiment in 1917 (A trip to commemorate the third battle of Gaza is just a little too far away!). If you would like to come with us, please drop us a line and register your interest early.