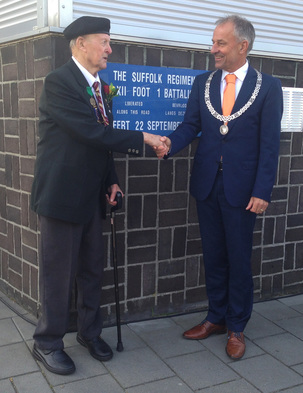 On the 20th September 2016 a party of 12 Friends left Ipswich, bound for Harwich and ultimately, Holland for the first Friends Second World War battlefield tour to the campaigns fought by the 1st Battalion in 1944-45. We were fortunate enough to have with us 1st Suffolk veteran, Cecil Deller, who served with 9 Platoon, A Company during the campaign.
The tour began with a slight delay waiting to board the ferry at Harwich, but we were soon on board and underway. The crossing was smooth and we docked at the Hook of Holland the following morning. After a mammoth road trip south from the Hook for over two hours, we visited first the small town of Haacht in Belgium. It was here that the tour 'officially' began with our first stand telling of how the Battalion came to the town to rest in February 1945. It was also here that the Drums, recovered from Roubaix in December, were played for the first time. The Drums had been hidden in Roubaix in May 1940 when the Battalion were retreating to Dunkirk.
After coffee, we travelled onto Heverlee War Cemetery just a few miles away to visit the gravel of Leonard Hollis; the only Suffolk soldier killed during the advance to Hamont on 20th September 1944. Hollis who was given a full civic funeral by the people of Hamont, was later reinterred in Heverlee after the war. He had transferred from the King's Shropshire Light Infantry to 1/Suffolk in August 1944.
From here it was a long drive onto Hamont itself, crossing the Meuse-Escaut canal at Lille St. Hubert; where the Battalion crossed on the 20th September 1944 and onto the Museum in Achel. We paused here to see where they crossed before driving onwards to the museum, which was once the headquarters of General Dempsey. It houses a small, but impressive, display of Suffolk Regiment-related artefacts including an original uniform donated by 1/Suffolk veteran, Taffy Lewis. The local historian Geert Stevens very kindly stayed open late for us to view the collection. After this we drove into the centre of Hamont to view the plaque outside the Town Hall unveiled in 1999 by Brigadier Bill Deller. Bill was to have accompanied us on the tour, but he sadly passed away a few weeks before hand. The Mayor came out to greet us all and was delighted to meet Cecil. He presented us all with a book about the town and we had our photograph taken with him in front of the Plaque. Taff and Cecil were the only two on our tour who had been there when it was unveiled.
After a short drive, we skirted through the country over which 1/Suffolk advanced towards Weert. We paused near the railway line to hear of Major Claxton's bravery in subduing an enemy strongest on the outskirts of the town, before driving onto our hotel; the very well appointed Hotel Munten, which was only a few yards from the Suffolk Memorial in the town, and was the forward HQ for C Company as the Company crossed the river on 22nd September. We arrived to discover that the second largest funfair in Holland was in town! but luckily it didn't start until Friday night. 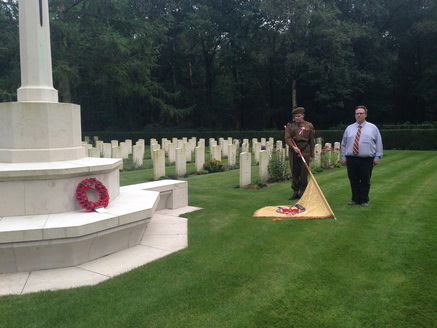 The second day started with us getting into our finery and walking the short distance across the bridge to the memorial plaque on the canal side. Men all wore Suffolk Regiment ties and the ladies, special orange rosettes with a cap badge in the centre. It was here that the remembrance ceremony took place to remember the liberation of the town 72 years before by men of 1/Suffolk. Cecil was quite the star of the show and he received a rapturous applause from all who attended. We laid a wreath and Taff made a short speech, mentioning the importance of the Friends in keeping the regimental spirit alive in a new generation and Brigadier Deller's hard work in ensuring that the plaques were erected in Holland and Belgium to ensure that the deeds of the Battalion would not be forgotten.
We then retreated to our hotel where the traditional cakes and tea were being served after the ceremony. Cecil sat as guest of honour on the top table, and was interviewed by local historian Wesley Haex, who originally invited us to attend the ceremony over a year ago. We changed from our finery and walked into town to have lunch. Whist in the town square, we recreated the famous colour photograph of the nurses and men of 1 Suffolk, taken on 22nd September 1944 by local doctor, Mr De Haan.
Back on the bus, and a journey northwards of about an hour to Overloon where 1/Suffolk suffered many casualties on 12th October 1944. Here in the War Cemetery, we laid a wreath and dipped the Ipswich & District, Suffolk Regiment old Comrades Standard to remember those buried here. We heard the story of Major Arthur Ellis; killed by a sniper during the attack on Overloon and described as a 'true English gentleman' He had been transferred from 7/Royal Norfolk the month before. Beside Major Ellis, lies corporal Nelson Brown who was a pre-war regular soldier who served with 2/Suffolk and joined 1/Suffolk in May 1944 having served in India for many years.
On the other side of the Cemetery, lies Norman Jepps from Shillingham and Max Rivers, both of whom were killed on 25th November 1944 during D Company's attack on the castle at Geijsteren. Rivers, alias Rothbarth was a Jewish refugee whose parents had fled to England in 1935. Interned, he volunteered for service and joined 1/Suffolk in 1943. Buried here also are Privates Clipston and Rawlings killed when their carrier struck a mine bringing up A Company's replacement commander after Major Ellis had been killed.
We then went to the start line on the edge of the wood and heard Taff tell us of Joe Fuller's account of the death of Nelson Brown. We followed the line of attack by A Company to the west of the village and the memories came flooding back to Cecil who recognised the stream we were standing beside as where the COs carrier came past as they advanced. We stopped at the site of the windmill in 'Oude Moulen' road, and heard of how Corporal Clarke won the MM for running messages under fire all day, and CSM Leatherland, the DCM for assuming command of A Company and pressing on to reach their objective. The final stop that day was the site of the factory; A Company's final destination on the day of the attack. We then journeyed back to Weert for dinner and much needed sleep after a busy but amazing day.

The third and final day saw an early start to visit Venray War Cemetery, where Cecil paid his respects to an old Chum, Douglas Cullingham, an Ipswich lad who joined up with him and was killed beside him at Venray. From here we went to the Molenbeek, the flooded dyke that the Battalion had to cross before the battle, and then visited the spot where Lieutenant-Colonel Craddock trod on a schu-mine. We recalled the career of Corporal Don Mowle the man who rescued him and Bob knew 'Spitter' Mowle when he served with the Suffolk and Cambridgeshire Regiment in the 1960s. Onwards to the woods west of Venray to hear of how Private Bob Linge won the MM. He was later to be immortalised in the Victor comic in 1970. A very pleasant lunch in the centre of Venray and then onwards to the village of Geijsteren. Here we visited the spot where the famous photograph of Lieutenant Guy Simpson and Private Malgate was taken - Malgate, was famously captured unawares by the photographer reading the latest newspaper he received from home!
Onwards to the castle itself, now partially rebuilt, to hear of D Company's attack on the 25th November 1944, where Captain Lewis Thomas won the MC and Private Les Jaggard, the MM. Here we had a special surprise as Taff produced Les Jaggard's medals from his pocket! We read the citation to his award of the MM and then heard of how C Company captured the castle on 30th November 1944 without a shot being fired. Whilst here, we visited the spot of the photograph taken of Captain Hugh Merriam returning from patrol with men of A Company.
Moving on, we drove the short distance to Wanssum to visit the ground of C Company's attack towards the wood on 8th January 1945. We heard of the Canadian Kangaroo APCs and how they delivered 1/Suffolk to the wood and of how Corporal Farthing tragically jumped onto a mine as he alighted. He was the only fatality of C Company that day. 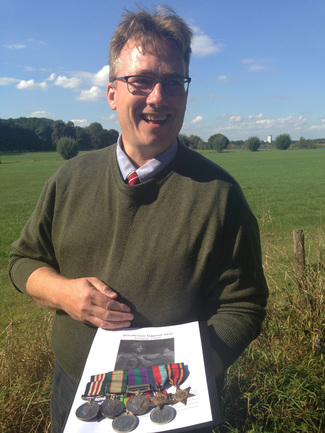 A short drive north, took us to Mook to visit the graves of Lieutenant's Cray and Harris; both missing on a patrol across the Maas on 28/29 January 1945. We read aloud the letter that Harris's widow wrote to Colonel Dick Goodwin in reply to the letter he had written to her informing her that her husband was missing. Here too we paid our respects to Private Basil Spendlow, the third member of the patrol to be killed that day.
The final visit of the tour was to visit Private Eric Holmes who lies on his own in the churchyard of the Catholic Church in the village. Described as the 'vanished' grave, he is certainly not forgotten by us. cecil laid a cross for us as the tour drew to a close.
Back to Weert to a final meal in the hotel. A speech by Mark thanking everyone for coming and a reading a passage from the Regimental History of how it was the Dutch who were held in the highest affection by the men of the Battalion. A speech by Taff, mentioned the importance of the Friends in ensuring that the Regiment should not be forgotten. Toasts were given for the Regiment, the late Brigadier Bill Deller and Bob proposed the toast to the Queen.
On the way home, the following morning, we made a small detour to see the graves of a crashed Halifax crew, whose funeral party was provided by the 1st Battalion on 23rd September 1945. Wesley, our host has managed to erect a memorial in their honour outside the town. A shorter journey saw us return to the Hook of Holland and after a long journey across the North Sea, we arrived home early evening, where after a short drive to Ipswich, the party broke up to return home.
The tour was a complete success and will lead to new friendships with the people of Hamont and of Weert. Though the veterans are now fading fast in number, the Friends will continue to tell the story of one of the most successful campaigns the Regiment fought in World War Two. We have been invited back in two years time, so please register your interest early if you would like to come with us!

Top: Cecil Deller pictured with the Mayor of Weert before the ceremony on 22nd September.Middle Top: A small ceremony of remembrance at Overloon. Middle Bottom: Mark recounts the story of Bob Linge's Military Medal with a little help from a victor comic. Bottom: Taff brings back Les Jaggard's Military Medal back to Geijsteren where it was won in 1944. Above: Some of the group at the Suffolk plaque at Hamont.
Powered by