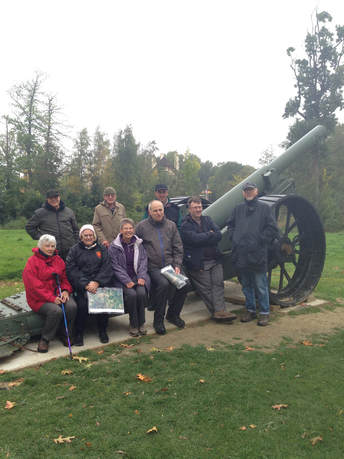 The 2017 Friends tour to the Western Front was this year split into two different areas: the actions in the Ypres Salient during the Third Battle of Ypres, and those around Cambrai, which saw the breaking of the Hindenburg Line.
After a leisurely start from Ipswich, we found ourselves in the Ypres Salient around lunchtime. On the way we visited the site of the old Fort Knokke astride the river User. Though not part of the planned itinerary, it was here in 1695, that Colonel Brewer's Regiment, later the 12th (East Suffolk) Regiment, were surrounded and forced to surrender. It was the only time in the Regiment's history that a complete Stand of its Colours were taken by the enemy. Onwards we travelled to visit the spot astride the Menin Road where 8th Suffolk advanced on the first day of the battle (31st July 1917). Though they gained ground, with the failure of the Division in front of them, they could advance no further. Holding positions along the road between Clapham Junction (to the west) and Stirling Castle (in the east), it was a disappointing start to the campaign for the Suffolk Regiment. He we heard of the congratulations their Brigade commander gave them for a gallant action and of how the Adjutant's orderly 'bagged' a grouse in the height of the battle, proudly carrying from battle tied to the end of his rifle.
Onwards we moved onto Poelcapelle to retrace the 8th Battalion's steps on 12/13th October 1917 when they advanced from 'Rose' trench to the Poelcapelle-Dixmude road. The weather had turned and again history repeated itself. The Division in front failed and again their advance was impossible. Here as we stood on the spot of the Poelcapelle-Dixmude Road, we saw just a few of the Battalion Commanders most amazing photographs, taken at the height of the battle. The Adjutant in his shell-hole that was Battalion HQ, Corporal Halewood DCM, MM, and Private Doy and Captain Hull on the muddy remains of the road. Onwards to Ypres, where we checked into our hotel. After a chance to refresh, we decided to avoid the mass crowds at the nightly Menin Gate ceremony, and walk instead to the peaceful Reservoir cemetery to see Anthony's relative who was killed in 1918 serving with 2/6th Manchesters. Here too, we laid a cross on the grave of young Suffolk Private Ardley Garrod; a soldier who cracked and shot himself after many weeks of hard fighting in May 1915; a tragic side of war. After a lovely dinner at the Kollenblaum restaurant (after a few beers the hotel's bar!), we retired for the next day. 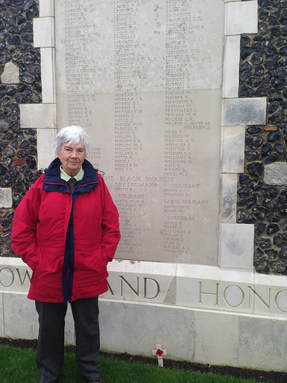 Day two saw us continue the tour in the Salient, visiting first the actions of 4th Suffolk at Fitzclarence Farm on 26th September 1917. Here though great advances were made, a heavy enemy barrage combined with jumbled orders, ensured that the assault ground to a halt. The CO and his Adjutant valiantly went forward to try to see if any further advance was possible, but many men had been killed and wounded and they had become dispersed into numerous shell holes and wrecked trenches across the battlefield. The Adjutant, was recommended for a DSO for his actions that day, he himself had to type the recommendation for his own award from the COs dictation! He was to be subsequently awarded an MC. After lunch in Zonnebeke, we discovered that a near perfectly-preserved dugout had been discovered under the village church and that it was being opened for just three months. We managed to secure ticket for just after lunch and after queuing to visit, we were soon underground in the damp, dark tunnels. Its condition was remarkable. Clambering down the slimy steps, we were literally walking back in time. It was a detour from the itinerary but it was well worth it.
Back on track, we followed continued the tour, following the advance of 2nd Suffolk on 26th September 1917 where the Battalion successfully captured the village of Zonnebeke. A textbook advance behind a creeping barrage, ensured that all objectives were taken. We heard too of how Captain Baker accidentally wounded one of his own men and had to send a note to the MO to state that the wound the soldier had suffered was not self-inflicted. He wrote "I did it!"  A journey back across to Varlet Farm at Poelkapelle was made for coffee. Here Dirk allowed us to walk around his museum which charts the actions of the Royal Naval Division in 1917, who took the farm. From here we travelled to the spot where Anthony's relative was killed in 1918. In a unique, and very personal commemoration, Anthony ate a sandwich from his relatives silver sandwich box which was sent home after his death. The final stop of the day was to visit Tyne Cot cemetery in the drizzly dusk to paid our respects to Kingsley Christopher Shuttleworth killed with 4th Suffolk in November 1917 and to our old friend, Frederick Maycock, killed in May 1915 commanding 1st Suffolk. Dinner at the Vivaldi was great, followed by a bottle of the 'Wipers Times' beer in our hotel.
The third day had an early start to venture south to Cambrai to the battlefield of late 1917 and the taking of the Hindenburg Line. First stop was the ground to the west of Lateau Wood where 7th Suffolk with the assistance of tanks, broke the Line in November 1917. Though fire from 'Pam Pam' farm held up their advance, two tanks were despatched and the position was silenced, allowing the dance to continue. Although their supporting Battalion in the north had been held up, they advanced and took the wood together with many prisoners and guns. Lunch was at the very posh 'Maison McDonald's' in Cambrai due to time constraints, but before long, we were back on the battlefield again.
This time it was to follow the advance of 9th Suffolk (again assisted by tanks) from 'Plush' trench near Villiers-Plouch to Ribecourt and then onto Marcoing. It was a phenomenal advance, over five miles; the largest single advance of any Battalion of the Suffolk Regiment on the Western Front so far in the war. The final stand of the day was to follow the route of 12th Suffolk at Bourlon Wood, which we completed on foot. Before visiting the Canadian Memorial, we took a small detour to see the remains of the wrecked Chateau wall; a rare surviving shell-pocked reminder of the Great War. After checking into our 'chateau' hotel (though not everyone was lucky enough to have a suite!) we journeyed into Cambrai for a final group dinner. 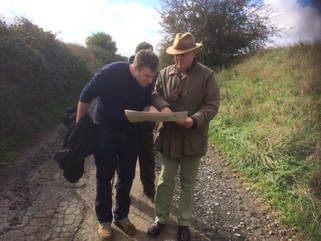 On the final day as we returned to Calais, we visited the final three stands of the tour. The first was 'Malakhoff' Farm at Hargicourt where, in August 1917, Lance Corporal Sidney Day of 11th Suffolk won the Regiment's second and final Victoria Cross. Using Viv's 'wizzy' sat-nav, we ventured deep into the corn field to find the farms exact location. On this spot, we planted our cross in remembrance of the Battalion's actions here. Back in the van and off to 'Boom Ravine' on the Somme. First Graham took us to Regina Trench cemetery to visit the grave of his relative John Christie Bilner Killed with 8th Suffolk in the advance that day; 17th February 1917, then onwards into the ravine itself. After leaving the van in the middle of what seemed like nowhere, we set off on foot. Deeper and deeper we ventured through the undergrowth until we were onto spot of the 8th Battalion's advance. This area of the battlefield, though remarkably intact, is seldom visited today. After hearing of the actions of the 8th Battalion, we jumped back in the van to drive to Arras to visit the wayside cavalry of Henry Roland Isaacs; killed at Arras in April 1917 and who has no known grave. His parents deeply mourned his loss and purchased a piece of land close to where he died and erected a memorial shrine. The also paid for a new set of bells in the local church at Feuchy Chapelle. Onto Roeux, where we visited the new memorial and a quick pit stop for a snack at the village supermarket, that now occupies the site of the Chemical factory which 11th Suffolk attack din April 1917. Then, it was a mad dash to the terminal to catch a train back to England.
It was an unforgettable and  action packed few days, where we crammed in over fifteen stands, six walks and much, much drinking! Next year it is planned to visit the actions of the March offensives in 1918 and, as the 'usual' crew will be coming back, space may be limited so please register your interest early if you wish to join us.
Powered by