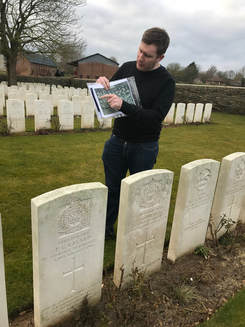 ​The fifth of our special commemorative anniversary tours started at t​he small Brewery Orchard cemetery at Bois Grenier, where the first casualty of the 11th Battalion, Lieutenant Ian Drummond Claughton is buried. After visiting the spot where in 1916, they had manned a communication trench, then two years later in the March Offensive, it had become the front line.
From here, onto the small and desolate 'Suffolk Cemetry' at La Rolanderie Farm. It was officially given the title in the 1920s after vehement campaigning by the Battalion’s wartime CO, Lieutenant-Colonel G.L.J. Tuck. Here in a desolate corner of Flanders, the scene of the march Offensive could be seen. He we heard of how the 11th Battalion held back the defenders allowing those on the flanks to retire, including their colleagues in the 12thBattalion. Before they finally fell back on the village of Erquiringhem. Here we laid a cross for Derek for an Old Ipswichean who is buried here, before we moved onto the village itself.
After hearing of the action that caused L/Corporal Sidney Day VC to be captured, we crossed the river and headed for  the hamlet of ‘Waterlands’ where later that afternoon, the Battalion fought of a counterattack along the Armentieres railway line that endangered the Division’s flank . Here we heard of the story unfolding as written by F. Hadyn Hornsey, who left one of the most detailed accounts of a private Suffolk soldier of 1918.
Onto the 74 Yeomanry Division memorial in St. Floris to pay our respects to those of the 15thbattalion, who arrived in France from the Middle East in May 1918, and who were to fight to the Armistice on the Western Front. A short stop at St. Venant where the Battalion receive its acclimatisation to the Western Front in July and where it suffered its first casualty to an accident after a working party in No-Mans-Land. Onwards briefly to Choques where 2nd Suffolk held the line in July and where 2/Lieutenant Joe Bailey added a bar to the MC he had already won whilst in secondment to the Norfolk Regiment. The former Reading footballer would end the campaign with a DSO, MC and 2 Bars, the highest decorated Suffolk officer of the Great War.
A small detour saw us visit the grave of Percy Bedward who was the first casualty of the 12th Battalion, and who is buried in the Cemetery there. He had died following an accident in a nearby training school. Here we also heard of 2nd Suffolk’s time here and then quickly onwards to Hinges to stand on the spot on the canal bank where 2nd Suffolk advanced over in July. Here Bailey added the 2nd Bar to his MC and also Captain Burman won one also. 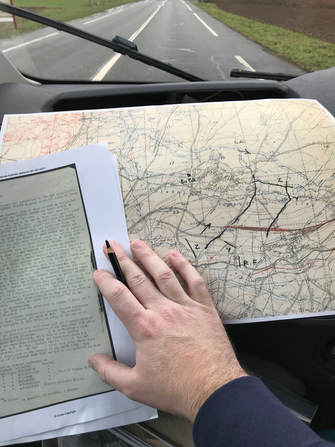 ​Our second day saw us make a leisurely start from the hotel in Aras and proceed down the Rue de Temple to stop and admire the 100 year of graffiti on the house at the end – formerly the haircutting salon of the Duke of Cornwall’s Light Infantry!
Onwards to Wancourt to follow the stand of the 2nd Battalion on the 28th March 1918 and their retirement from frontal positions to the Neuville-Vitasse Switch Trench. Walking the ground, the terrain represented much in common with Balaclava. On the other side of the village after we had paused and cleaned the mud from our boots, we hear of how “There is a story, such a painters ought to make immortal, and historians to celebrate, of how certain Suffolks, cut off and surrounded, fought back to back on the Wancourt-Tilloy road” In actual fact, the Battalion’s gallant last stand was nowhere near the Tilloy road.
In the cemetery here, Jim told of the story of his relatives and how just a few graves away, lies a descendant of the man who saved Epping Forest. Viv laid a wreath on the grave of Private Garrod for Kelvin who could not be with us. Garrod, who was killed during the Battle of Arras in April 1917. was from Kelvin's village of Bramford.
As the weather worsened, we braved a walk on the windswept drizzly Henin Hill, scene of 11th Suffolks stand, and unfortunate retirement in March 1918. We followed the after action report from the war diary, stopping to hear of how the German advance developed and of how they were enfiladed from both flanks. A short detour to Railway Cutting Cemetery and then onto Gomiecourt itself to follow the advance towards the village and then around it to make up the shortfall of the battalion on the left flank that failed to make any headway in the advance that day.
Then, we moved onto visit the small and somewhat off the beaten track, Railway Cutting Cemetery, where several fallen of 2nd Suffolk lie following their successful attack over the railway line towards Gomiecourt on 21stAugust, which resulted in the loss of Lieutenant Peter Layard, whose grave we continued onward to visit as the weather closed in. 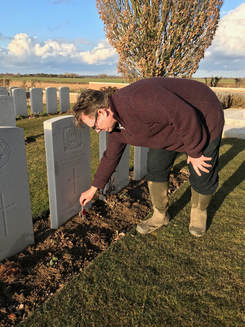 ​On the final day, we ventured northwards to Flesquiers where we were to follow the advance of 2nd Suffolk. First we stopped and located the spot of Knights Bridge, where on 26th September 1918, the 2nd Battalion crossed with scaling ladders and pressed onwards to the village. Scrambling down the undergrowth, we found an age old path and with many cuts and grazes, we were alongside the canal. It was of course, dray in 1918.
Just beyond the Chateau, we stopped and heard of the wedge the Germans drove in the Battalions advance, and of how quick thinking section commanders. Stemmed the tide, allowing the village to be taken with very minimal casualties. We walked the line of advance, crossing the Hindenburg Line and ending up at the Tank Corps Memorial.
After a pleasant packed lunch in the van outside the cemetery in the village (the site of the Sugar Factory that caused heavy casualties to the Guards advancing on the left of the Battalion), we were off to cover the land the 15th Battalion’s advance in September, from Bapaume towards Epehy – one of the last Battle Honours the Battalion was awarded. He we followed the advance in the van as this was the time of great movement and miles were covered in a successful advance towards the village. It was also one of the very few times in the the Regiment’s history that after the action, they were relieved by US troops.
The final stand of the day was to visit the grave of Corporal Staden MM of the 11th Battalion. In a desperate single-handed action he kept the enemy at bay for hours, before he was himself killed. Buried by the Germans his original grave marker was inscribed to a “Very Brave Englishman”. A fleeting stand at Vendegies, the last action of 11thSuffolk during the War, and then back to our hotel and a final meal together.
As we journeyed back to the tunnel, we made a whistle-stop tout of all the places where the known Battalions of the Suffolk Regiment ended up at the time of the Armistice (2nd, 4th, 11th, 12th and 15th Battalion’s).
The attendees were were keen that the tours did not end at this point and urged us to organise another, so next year we hope to go to Arras for a dedicated tour, since we covered this only briefly in 2017, concentrating instead on Cambrai and Third Ypres instead.
Powered by