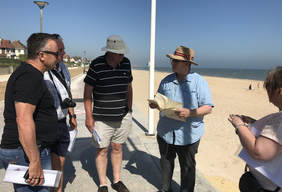 The idea of a Friends tour to Normandy had been the wish of the late Brigadier Bill Deller, who was keen that the links with our Friends in Normandy should be maintained after the 'official' pilgrimages stopped in 2004. After much planing and a couple of false starts, 2018 saw a party of nine Friends venture to the battlefields of Normandy.

After a leisurely start, the tour began. A short drive from Caen, saw us standing on Queen White beach where 74 years before, the men of the 1st Battalion set foot ashore at H+60 (one hour after the assault waves landed). Here we heard of how the Battalion, depleted of heavy equipment and men following the Dunkirk evacuation, recovered and reformed in late 1940, before it was sent to the west country. We heard of the training in Scotland and how they trained in combined operations for the invasion in which they were to take a pivotal part. We heard to the succession of Commanding Officers and of how in June 1943, Lieutenant-General R.E. Goodwin, took command and of how he built up and fostered the Esprit de Corps within the Battalion. 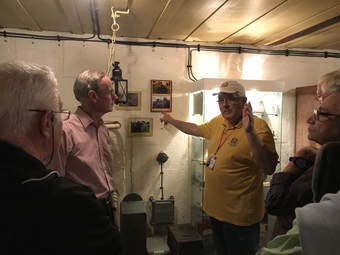 From the beaches, we moved inland via the route taken on D-Day. We travelled to the original assembly area, which was on the day, found to have been devoid of cover, and onto the second assembly area, from where the Company’s set forth to their objectives. First we followed the route of C Company into the village of Colleville and he we heard of how Corporal Ashby spent the morning drinking calvados with the Mayor, and how Corporal Monk was killed by shell fire in the village street.
Onwards we walked through the new residential estate to the Morris bunker, where we hear of the construction of the gun position and of how Major McCaffrey was to attack it with Bangalore torpedoes and infantry but, at the final minute before the attack, the occupants surrendered.
After a pleasant lunch in Luc-sur-Mer, we went back to the Hillman bunker for a special look around. Here we saw the splendid work that our friends Les Amis du Suffolk Regiment have completed at the bunker in restoring it to the condition it was in 1944. Inside we saw the numerous displays of Suffolk Regiment material and it was a pleasant chance to see many of faces (and Friends members) who visited Normandy in the 1980s and 1990s, many of whom are sadly no longer with us. After this we traced the advance of A Company from the end of the village to the outer wire of the complex, and from a suitable vantage point, we recounted the action that day.
Of the blowing of the outer wire and the first initial attack, to their withdrawal and then the widening of the gap in the wire and the armour pushing through with the infantry to finally overcome the position late in the day. A truly great feat, accomplished with minimal casualties that is now generally considered the most important achievement on D-Day by troops of the 3rd (British) Infantry Division. The final stop of the day was to visit the Commonwealth War Graves Cemetery at Douvres-la-Deliverande where most of the fallen of D-Day now lie, along with those of the actions at Le Mesnil and a few of the casualties of the Chateau de la Londe. ​ 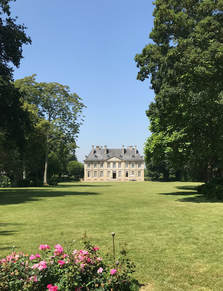 The second day saw us journey first to Le Mesnil Wood where between D+3 and D+13, the Battalion were stationed, having marched here on the day after D-Day. It was here on D+3 that the Battalion Commander, Lieutenant-General R.E. Goodwin was wounded and his Intelligence Officer, Lieutenant Paddy Keville was killed when their carrier received a direct hit from a German 88m gun when they left the safety of a wood in the Battalion's positions. It was a poignant time for Colonel Goodwin’s son Robert, who accompanied us on the tour as it was the first time he had visited the spot where his father was wounded.
Back into the coach, we travelled the short distance across to the start line of the attack on the Chateau de la Londe on 28th June. Here on the edge of the wood at La Londe, we stood on the starting line and set the scene for the battle that was to follow. Here in the middle of the cornfield, we traced the steps of B and C Company's in their advance towards the Chateau wall. Hearing of how both Company suffered their greatest number of casualties in the advance to its walls. Passing Le Petite Londe, we now drove to the Chateau de la Londe itself, where we had arranged with Madame de Formigne to have a look around inside and around the Chateau's grounds. 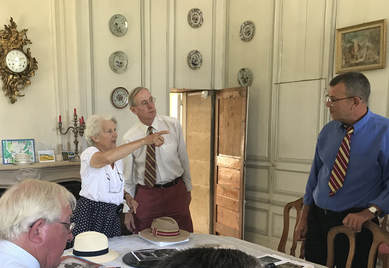 Madame showed us in and very kindly allowed us to see some of the families photographs showing the damage caused to the chateau and the rebuilding which was not finished until 1958. She allowed us to see around the grounds, and to the site of the original Suffolk Cemetery where the dead of the battle were originally buried. We picked up the Battalion's advance on the inside of the Chateau's walls and see where B and C Company got into the grounds. Here we heard of B Company's confusion and of Major McCaffrey's diving into a thorn bush to escape capture and of how continual mortar barrages caused many casualties around him including Captain Archdall and C.S.M. Broom.
A little further along the wall in C Company's sector, we hear of how Captain Brown, a Canadian officer confused a German tank for an Allied one and after banging on the turret for assistance, a German popped out - Brown immediately ran for cover! Here a few moments later, Private Crick and Lieutenant Woodward disabled two tanks with PIATs (anti-tank weapons).
After a pleasant journey to Pegasus Bridge for lunch (the bridge was held by C Company on D+1) we went eastwards over the River One to visit the villages of Sannerville and Bannerville taken by the Battalion on 15th July 1944. Here the advance was swift and quick, but upon reaching Bannerville, the massive aerial bombardment had turned the ground into a mass of craters. It was here that we heard of how Cecil Deller found his china scottie dog in the rubble and how he kept it as a tallisman, and of how Cpl. Parsons had a narrow escape from a German sniper and whose chum hacked off the SS Eagle from the dead snipers jacket as a souvenir for Parsons.
The final stop of the day, was to visit Hermanville cemetery to visit the dead of the day and in particular to 'Nibby' Maynard whose great grandson, Colin was with us on the tour. Here too lie D Company's commander, Major Papillon, CSM Overman, Harry Jockel and Wilf Crisp, all pre-war 2nd Battalion men who finished their time overseas and returned to the UK to join the 1st Battalion and then went on to serve in Europe. Back to the hotel at a reasonable hour and then quickly away to a local bar to watch the World Cup. 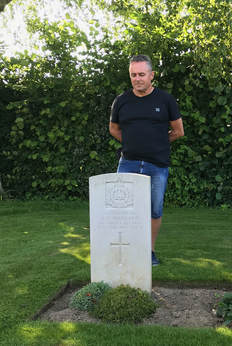 The final day of the tour, saw us venture to seldom visited country deep in the bocage. After a gentle start, we made our way via Vire, towards Tinchebray, stopping at the crossroads at Coquard where on 13th August 1944, the Battalion launched operation 'Grouse'  Here, not fully recovered from its losses at the Chateau de la Londe, B Company attacked with A Company to take the crossroads. In the darkness they were successful, but well dug-in in concealed positions, they withdrew to await first light and artillery support. Small skirmishes were costly and the terrain of small fields edged with hedgerows, slowed the advance towards Tinchebray.
As the advance continued later that day, a link-up was made with the Americans on the right flank, but A Company on the left made slow progress being held up by a well defended farmhouse. After a bitter fight, it was taken, earning Major Prescott the Military Cross. Later that day, B Company who had lost their Commanding Officer, their Second-inCommand and two of the three Platoon Commanders, took a farmhouse on the high ground to the left of the main road. Here we heard of 12 Platoon's final advance and the loss of Lieutenant Doree.
​Further down the road, we followed the route taken by two mobile striking forces led by Lieutenant Perret and Captain Mayhew that set off for Flers via, St. Quentin des Chatonnettes. We arrived in Flers just before lunch and a chance to have a photograph taken before the town sign which we could email to Ken Mayhew, now 101 years old, but considered by many to be the 'Liberator' of Flers. 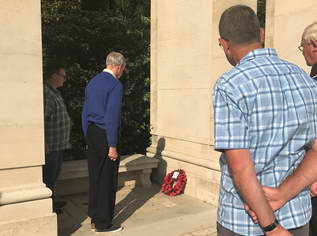 A pleasant lunch and a pleasant drive to St. Charles de Percy Commonwealth War graves Cemetery to pay our respects to the dead of the battles of August 1944. Here we heard of the story of Captain Powell who had just a fortnight before, been awarded the Military Cross for his actions on D-Day, and of Captain Leach who had only joined the Battalion a week before he was killed.
The final long drive of the day was almost back to the coast where we were to visit the large and imposing Norman chateau at Fontaine Henry, where the Battalion spent Minden Day in 1944. A brief look around with the kind permission of the owner, allowed us to find the locations two photographs taken that day. One now the gift shop, the other by a wall just outside. Back in the coach and quick journey to the British Memorial to the Missing at Bayeux which contains the names of just a handful of Suffolk men who were killed but who have no known grave. One of these was Major Coppinger Hill who disappeared in the muddy lunar-like landscape of Bannerville. Robert laid a wreath on behalf of us all and spoke the exhortation. It was formal end to the tour.
A final group meal in Caen and a chance for everyone to have a meal together. the usual speeches and toast to the Queen from Bob. it had been a fantastic few days following the history and campaigns of the 1st Battalion. We saw how the Battalion evolved and how they were continually reinforced, and how time and time again, they succeeded where others had failed, quite often though at the cost of they own destruction. By the end of the campaign, casualties were almost 50% of the Battalion strength on D-Day and officers were being killed and wounded at a rate of three per week, but still they carried on displaying the fine and unique qualities of the Suffolk soldier throughout.
It was a highly memorable few days and one which has attracted much interest online and also on social media. There is most definitely the scope to return again soon and explore some of the other areas of the campaign (interest permitting of course!).
Powered by