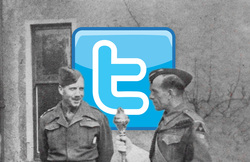 To mark the 70th anniversary of D-Day, the Friends decided to try something a little different to remember the actions of the 1st Battalion in 1944.
Using the medium of Twitter, we posted, almost minute by minute, the rolling story of the Battalion. From it's being wired into its camp at Hordean, to the final capture of the Hillman bunker on the evening of D-Day, we told their story in 'tweets' over the week leading up to, and on the anniversary of D-Day itself (Friday 6th June 2014).
Such was the popularity of this unique running history, which was followed by BBC Radio 2, Chris Evans and Lord Ashcroft, that many people have since asked if it could be made available to be read as a complete narrative.
Therefore bowing to popular demand, we have published the tweets here in full, so that the story of 1//Suffolk on D-Day can be read by all. By using many previously unpublished memoirs of private soldiers who where there, coupled with many previously unpublished photographs, it is perhaps the most complete 24-hour history yet written of an individual infantry battalion in the Normandy Campaign. We hope you enjoy reading it.