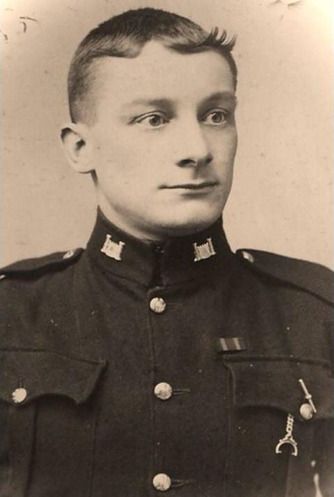 On the 25th August 2014, a joint party of Friends and Suffolk Western Front Association members, journeyed to France to commemorate the 100th anniversary of the Battle of Le Cateau. Here is a brief report of the trip.

After an early start, we arrived in the village of St. Waast, around lunchtime. It was here where 2nd Suffolk spent the night on the 21st August, before marching via Hanin, to Mons. After hearing the story of how Lieutenant T.W. Reynolds met members of the Battalion billeted in the village whilst he was attached to the Divisional Cyclists, and how he knocked a precious china swan off the windowsill of the local hotel in the process(!), we got back on the bus and headed north.
Retracing the steps of the Battalion as per the War Diary, we travelled through Hanin and onwards via the Pommereil road to the northern edge of the Mons-Conde canal.
Here we heard of how C and D Company's under the command of Major Peebles crossed the canal on the afternoon of the 23rd August 1914 to support the East Surreys who were taking heavy casualties to accurate German artillery fire on the northern bank.
After hearing of the first three Suffolk Regiment soldiers to fall in the Great War, we headed south to Le Cateau, following the route that 2nd Suffolk retreated on the 24th August; from Dour via the Bois de Boosu, to Bavay.
From here we went south to Le Cateau, calling in to visit Le Cateau British Cemetery, which was in 1919, extended to include many more graves, including those of the German Army. It was here in 1914 that the graves of the fallen Suffolk soldiers, were dug when it was originally known as the "Cemetery d'Honeur." Here we found the graves of Lieutenant Payne and Sergeant Molineux, and Privates Bristo, Parmenter, Long and Mattless, along with nine other unknown Suffolk Regiment soldiers of 26th August, and two Suffolk soldiers from the battles of December 1917.
Having left the party to find a suitable hostelry in Le Cateau, Taff and Mark went out on a special reconnaissance for the following days tour. Using a period map and compass, they nearly got lost on a bit of minibus safari; the ground being somewhat more waterlogged than it was in 1914! but after re-joining the rest of the party in a cosy Estaminet, we journeyed to Valenciennes to our hotel and good nights rest after a very busy first day. 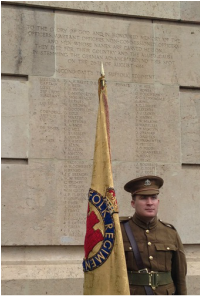 After a great breakfast, we journeyed back to Le Cateau for the service of commemoration at the II Corps memorial on the hillside overlooking the battle. It's position is on that of the Battalion HQ created there by Major Doughty after the Commanding Officer; Colonel Brett had been wounded on the morning of the battle. Mark carried the Standard of the Ipswich Branch of The Suffolk Regiment Old Comrades and Taff laid a wreath on behalf of the Regiment. After this, our battlefield tour began in full!
Everyone received a portrait of a Suffolk soldier and we would hear of their careers with the Regiment and their association with the battle as the tour progressed.
We started in the north of the Suffolk positions, walking the front line of the two forward Company's after they had turned about on the road and fanned out into their initial positions. From here we went back to the memorial to hear of Lieutenant Bittleston's gallant actions in keeping the Battalions' two Maxim guns in action and of how Major Doughty scavenged for ammunition to re-feed the guns belts.
From here we went over to the left of the battlefield to hear of how early in the afternoon, Lieutenants George and Burnand fought back-to-back as the enemy came on in force from both the front and the rear. Here too we mentioned the death of Colonel Brett and of his previous service with the Regiment.
As the afternoon was drawing to a close, we journeyed to a spot in the battlefield where with the aid of our period map, we retraced the steps of the two stretcher bearers that conveyed Colonel Brett's body from the battlefield. After arriving in a sunken lane; where the map stated that Colonel Brett's body was buried, we paused to lay a poppy wreath and remember him and the other men of the Regiment who died that day.
After finally going back to the memorial to hear of the lives of the remaining Suffolk soldiers; including a Suffolk soldier simply known as "Bas" - who escaped from Doeberitz PoW camp on 26th August 1917; three years to the day from when he was captured at Le Cateau! we jumped back on the bus for the journey back to Calais. 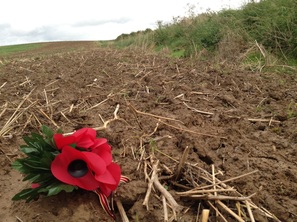 We crammed in as much as we could in the time available and we were honoured to finally find what we believe to be the last resting place of Lieutenant Colonel Brett; a spot to which no-one has visited since 1919.
One of the most moving events of the tour for us was finding the fitting epitaph on the grave of Lieutenant Payne, killed on 26th August 1914 whilst serving with 2nd Suffolk.

It epitomised the Suffolk Regiment's gallant actions that day;

Tell England ye who pass
We died for her
So rest content
Main Picture: The grave of Sergeant Molineux in Montay British Cemetery, with a photograph of Sgt. Molyneaux below. Middle: The Standard of The Ipswich Branch of The Suffolk Regiment Old Comrades at the II Corps Memorial. Bottom: Our wreath laid in the sunken lane; the believed last resting place of Lieutenant-Colonel Brett.
Powered by