a brief history of the
​Loyal suffolk hussars

​As far back as 1599, it is recorded that a unit of 'fencible cavalry' existed in the county of Suffolk, however it was not until 1793, that Mr. Arthur Young, who lived in the village of Bradfield Combust, began to form the many groups of 'horse militia' in the county of Suffolk into one established regiment.
Thus in that year, a regiment of yeomanry cavalry, was officially created in Suffolk with units stationed at Ipswich, Bury St. Edmunds, Bottesdale, Ickworth and Fornham. The overall strength of the new unit was 206 men and it was noted that their mounts consisted mainly of Suffolk Punch horses.
​

Troop Of Horse To Imperial Yeomanry 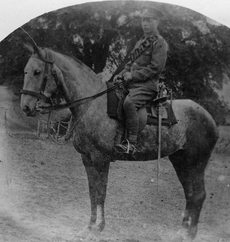 Throughout the reign of Napoleon, the Regiment stood ready to resist an invasion should it come. Following his defeat in Waterloo, the unit was gradually run down in numbers, but it did support the civil powers more than once between 1815 and 1827. By 1827, the Regiment was reduced further, but unlike many of its counterparts, it was not totally disbanded and it is is recorded that at least one Troop remained and this mutated into the 'Bury St. Edmunds Troop of Horse in 1831. Gradually more and more troops were being voluntarily formed and in the mid 1850s, a standard uniform was being adopted by all the county's troops. By around 1855, the universal title of "The Loyal Suffolk Yeomanry" was in use, with the adopted uniform being of a rifle green jacket with yellow trimmings, the busby carried a scarlet bag. 1869 saw the merging of the Bury and Melford Troops and in 1872, it was recorded that total strength of 145 all ranks. In 1893, the Centenary of the birth of the Regiment was celebrated with a military tournament and complimentary ball. The Honourary Colonel, H.R.H. The Duke of York, being in attendance. He was later to become His Majesty, King George V.
The Boer War gave the yeomanry the chance they had always longed for. The Imperial Yeomanry was formed with Colonel A.G. Lucas, Loyal Suffolk Hussars, being on the original government committee that proposed the scheme. By early 1900, 43rd and 44th Squadrons, Imperial Yeomanry, were sailing for South Africa. After supporting Lord Methuen's division in Western Transvaal, they pursued the infamous Boer leader, De Wet, before coming home in July 1901. 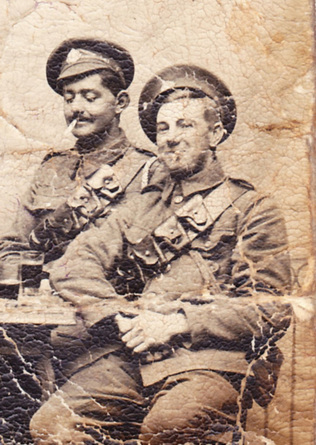 Mobilisation in August 1914, saw the Regiment at Martlesham near Ipswich. The following September, the Regiment received orders to sail for Gallipoli, however they would be going without their horses. On 11th October 1915, they landed at Walkers Pier, Gallipoli with their comrades, the Norfolk Yeomanry. It was a semi-static life for the first month with ranks being seriously depleted by sickness and dysentery. The great blizzard of November did nothing to add to the morale of the men with frostbite adding to number of the men becoming ill.
Withdrawal from the peninsular began in December and, after a short stay at Mudros, the Regiment went Egypt, where it was officially declared as 'dismounted'. After training as infantry, they took over trenches between El Shatt and El Ferdan. Early 1917, saw an official name change for the Regiment. As part of the 74th (Yeomanry) Division, they became the 15th (Yeomanry) Battalion, The Suffolk Regiment. They would however fiercely hang onto their original badges and only those who joined them in France wore the standard cap badge of the Suffolk Regiment. Under General Allenby's command, the division held the line around Wadi Saba where it repulsed many Turkish attacks. It went onto the offensive in early November, capturing the towns of Beit Nebala and El Jib; thus forcing the surrender of Jerusalem. It's capture was the 'Christmas present for the British people' as Lloyd George said.
On 3rd April 1918, the Battalion received orders to sail for France and after acclimatisation to the different style of warfare on the Western Front, they took over the line at St. Venant. A spell on the Somme in August as part of III Corps, led in September, to their beginning the offensive that would eventually lead to victory in November. In early October, they were around Neuve Chapelle, where their infantry counterparts had fought in 1915. The war ended for them at Tournai; the city being captured two days before.
Unlike the usual rule that yeomanry do not carry a Colour but instead a Guideon, the 15th Battalion were granted in 1920, the presentation of a King's Colour, for their services as a dismounted infantry unit. It was however never carried and immediately laid up in 1921. The year 1920, saw the final reversion to the pre-war army, with all of the war created Service Battalions being disbanded and the all but the fourteen most senior yeomanry regiments converting to artillery. Thus the Loyal Suffolk Hussars converted to become part of a Field Brigade of the Royal Artillery, a role which it carried till its amalgamation.

Peace saw the Suffolk and Norfolk Yeomanry fused once more, but by 1939, they had again parted company. The Suffolk Yeomanry was now titled the 55th (Suffolk Yeomanry) Anti-Tank Regiment, RA, and wore the badges of the Royal Artillery. Officers however appeared to keep their original yeomanry collar badges.
When war came, they found themselves on coastal gun duties within the county between Aldeburgh and Lowestoft. After a brief spell in the 79th Armoured Division in 1943, they joined the 49th (West Riding) Division as Artillery Support and crossed with them to France in June 1944. Throughout the campaign in North-West Europe, they and their 6 and 17 pdf guns, they supported the infantry elements of 49th Division until VE Day. It was at Fontenay le Pesnel and Rauray in June/July 1944 that they suffered their greatest number of casualties of the campaign. They wore in addition to their woven shoulder titles, the white metal collar badge of the old Regiment (The Loyal Suffolk Hussars) on their berets.
The post war army saw again a vast run down in the territorial Army. The 55th Regiment, soldier on until  throughout the 1950s, however their presence was confined mainly to the north of the county around the Norfolk borders. They remained in a ground combat role, using many varied forms of weaponry including the Wombat; a recoiless anti-tank gun. However in 1961, at the time that the Suffolk and Cambridgeshire Regiments were fusing, the Regiment merged again with their counterparts in Norfolk to become the Suffolk and Norfolk Yeomanry.