a brief history of the
suffolk & cambridgeshire Regiment (T.A.) 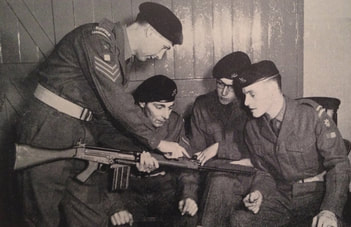 The story of the Suffolk & Cambridgeshire Regiment (T.A.) is a short one. The Regiment came into being on the 1st April 1961 by the amalgamation the old 4th Battalion, The Suffolk Regiment and the old 1st Battalion, The Cambridgeshire Regiment.
The 4th Battalion remained after the amalgamation of the regular Battalion, the only unit to still carry the old badge of the Suffolk Regiment. The newly formed Regiment however, carried over all the previous two Regiment's customs and traditions and for the time being, both sets of Colours were to be carried together by the new Regiment.
In the early days, a major recruiting drive was needed to boost the numbers up to strength and it was not until 1963, that the Regiment finally had a full compliment of troops. In that year also, Lieutenant-Colonel H.B. Monier-Williams O.B.E. T.D., late of the Suffolk Regiment, designed for them, their new cap badge fusing the castle of Cambridge, with the scroll and key of Suffolk. they had until then, under great duress, worn the badge of their regular regiment; 1/1st East Anglian Regiment (Royal Norfolk and Suffolk [9&12]).
The year 1963 also saw the presentation of new Colours by the Colonel-in-Chief of the Regiment, H.R.H. The Princess Margaret, C.I., G.C.V.O. at Felixstowe, thus retiring the old Colours of each former regiment, both presented at Windsor in 1909, by His Majesty, King Edward VIII. The new Colours contained both sets of Honours won by the descendent Regiments.
The Regiment continued just as the previous Battalion's had done, with regular meetings at numerous TA centres and Drill Halls across the two county's, and at annual camp at various locations across the country. By mid 1964, all units were being issued with the same equipment as the regular battalions such as SLR rifles and Sterling SMGs and the old 1937 Pattern web equipment was replaced by the newer 1958 Pattern.
The regiment was called out twice in their existence to assist the civil powers. Once in 1962, when vast snow storms closed the two county's railways, and they cleared tracks between Bury and Newmarket, and again in 1965, when miners on strike in Wales threatened fuel supplies to power stations in the east. In 1967, they briefly became film stars when members of the Sudbury detachment starred as extras in the film 'The Witchfinder General' which was being filmed in Lavenham, and the same year, detachments at Leiston, also featured in a BBC drama about smuggling.
By 1967, there was a further run down in the size of the Territorial Army and regretfully, the Regiment was reduced a cadre and then finally disbanded. The remaining permanent staff; just over 20 in number, were transferred over to the new Territorial Battalions of the parent Royal Anglian Regiment.
It was not until September 1979 that the Colours of the Regiment were officially laid up. They had until then, been carried by the descendant battalion of the Royal Anglian Regiment. The Queen's Colour was deposited in the Suffolk Regiment Chapel at Bury St. Edmunds, and the Regimental Colour in the Cambridgeshire Regiment Chapel in Ely Cathedral.