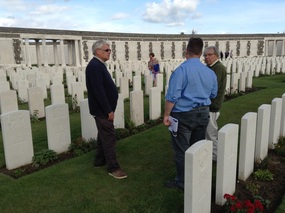 Since the earliest days of the Friends back in 2008, we have always wanted to organise a dedicated Suffolk Regiment battlefield tour to Europe. In August 2013 that dream became a reality. Please keep reading to see how much we packed into it!

On 25th August a small party left England at an unearthly hour and travelled by ferry to Dunkirk. Below is a brief account of that amazing journey.

Our first day found us in the Ypres Salient, where we were off first to see the ramparts where 2nd Suffolk were billeted and where the famous "Wipers Times" was later printed. From here to St. Jean  - the site of where the 9th Battalion first suffered with poisoned gas. Onto St. Julien where we heard of the first actions in the Salient that the Regiment was involved in and the Cambridgeshire's gallant holding action at the "Border House." Off to Varlet Farm for a quick cup of tea and a chance to see their excellent little museum of dug-up artefacts. Stopping at Tyne Cot, we spent a quiet few minutes at the Grave of Captain Maycock (left) before moving via the Frenzenburg Ridge, to Ypres for dinner. At 8.00pm, we attended the service at the Menin Gate where Taff, Tracey and Mark laid a wreath on behalf of the Friends and Brigadier Deller read the Kohima Epitaph. It was an exceptionally moving service, never to be repeated. Back on the bus and off to our hotel in Poperinge, home of the famous soldiers 'everyman' club; TocH.

The following day saw us leave Poperinge and venture to the southern side of the Salient. Via Westoutre, where the 1st and 2nd Battalions met in 1915, onwards south via the lovely sleepy Suffolk Cemetery where Pip laid a wreath for us. From here it was onto Croenaart Wood, where Tim told us the story of his relative who is buried there. Back on the bus and off to "The Bluff" captured by elements of 2nd Suffolk in 1916. From here across to Ploegsteert, or "Plugstreet" as the Tommies called it, to visit the site of the famous Christmas Truce in December 1914.  Following lunch in Armentiers we were off south to Neuve Chapelle, where we stood on the spot of the battle recreated in the famous 1918 painting by Fred Roe. After a quick look at the Indian Memorial across the road, we were on our way again to Mons, and to the canal bank west of the town where the first Suffolk soldiers fell in action in August 1914. Back on the bus and south now to Le Cateau, in time for a quick talk on the battle from Taff before the Mayor arrived for their annual short service of commemoration. Tim Davies laid a wreath on behalf of the Friends and to our surprise, we were invited back to the Town Hall for a "Vin d'Honneur" with the Mayor! Brigadier Deller kindly thanked them for our hospitality and we were invited back for next year's celebrations (if we can make it!) Sadly we had to leave and get back on the bus to travel into Cambrai for dinner and a well needed beer, after which we trundled onto Arras to our hotel. 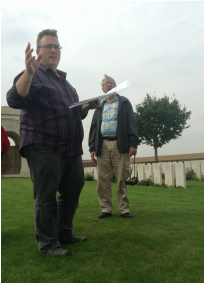 Day Three began with a special visit to Arras Memorial for Margaret, to find the name on the memorial of her grandfather, Charles Cockell, MGC. Margaret laid a wreath and we paused for a few moments whilst Mark read out some sections from Charles surviving service papers. Taff also paid a visit to the grave of his relative, Arthur Watson who also rests here. Back onto the bus to visit the Wellington Caves, where Dave had prepared a special guided tour for us. After donning steel helmets (well fibreglass actually), we saw the newly renovated walkways and the recreated altar where the Friends and the 'Khaki Chums' held their historic church service in 2007. Back up top, we journey past a house in the Rue D'Temple which still bears WW1 graffiti, and onwards south to the Somme. Lunch was served at Avril Williams guest house at Auchonvillers, and a chance to see her recreated trenches and excellent museum. Moving south again, we visited  Lochnagar crater, where 11/Cambs & Suffolk attacked on 1st July 1916. A quick look around La Boiselle, and the site of Keats Redan, and off to Thiepval where Christine laid a wreath on behalf of the Friends. By now it was time for a well needed cup of tea, so we journeyed across to the Ulster Tower, where we heard from Mark about the Schwaben Redoubt and the Cambridgeshire's attack upon it in September 1916. We saw too St. Pierre-Divion down in the valley where they began their attack from. Back on the bus and south again for a quick stop in Fricourt, where all those from Ipswich posed below the road sign "Rue D'Ipswich" - a reminder of when the borough was twinned with them and the nearby Bazentine's. Passing Mametz wood with its imposing Welsh dragon memorial to the 38th (Welsh) Division, we ended up at the crossroads at Bazentin le-Grande, where the war damaged wayside crucifix still stands. Mentioned by Captain F. Stormont-Gibbs in his book, we heard from Taff of his account of finding it one night on a working party. Back on the bus to pass High Wood and Caterpillar Valley cemetery, before ending up at Delville Wood, captured by elements of 2nd Suffolk in 1916 and how Colonel 'Tiny' Heals father commanded the South African Brigade during the battle and how he was later asked to play rugby for the Springboks in 1936. South again but only a little way, to view the site of the "Quadrilateral" where the commander of 9th Battalion, Lieutenant-Colonel AP. Mack, was killed in 1916. The final visit of the day was to Apostles Copse, near Sheffield Park, and in particular Luke Copse Cemetery where a small number of Suffolk men lie peacefully together with a number of York and Lancs. Here we made a chance discover that two brothers with sequential service numbers lie less than ten feet apart, their family having given them both the same headstone inscription "Alleluia for the Lord God omnipotent reigneth." A final meal together in Arras a glass raised to a very successful trip, afterwards, we journeyed to the Canadian Memorial at Vimy to see it in lit up in the darkness. For Taff and Mark it was a chance to visit the names of their relatives carved upon it; both of whom served with the Canadian Expeditionary Force. Margaret too could see to the land to the north, where her grandfather fought and died. 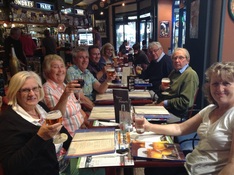 The final day saw a leisurely start, then off to the Wancourt-Tilloy road, scene of 2nd Suffolks famous stand in March 1918 where there actions were described by Taff; "There is a story, such as painters ought to make immortal and historians to celebrate, of how certain Suffolks, cut off and surrounded fought back to back on the Wancourt-Tilloy road." On to the wayside Calvary created by the parents of Lieutenant Henry Isaacs who was killed during the 1917 battles whilst serving with the 7th Battalion, but who has no known grave. His parents purchased a plot of land in the 1920s as a lasting memorial to him and maintained it until 1940. We laid a cross to remember him, then onwards to Roeux, where the vast chemical factory was attacked in 1917 by both the 7th and 11th Battalions. A quick journey into the local supermarket for those wishing to purchase wines and spirits! then onto Bourlon Wood to see the ground fought over by the 12th (Bantam) Battalion in 1917. On the final journey back, we stopped for lunch amidst the coal heaps of Loos. A quick bite to eat here then off once more to our final stand of the trip at Hulluch, where Sergeant Saunders won the Regiment's first Victoria Cross in 1915. Here were heard an 'unvarnished' account of the action before hopping onto the bus for the final time to drive to the tunnel.

All Friends attending had a fantastic time and it all came in under budget too. So positive was the feedback, that we are contemplating organising another tour very soon! 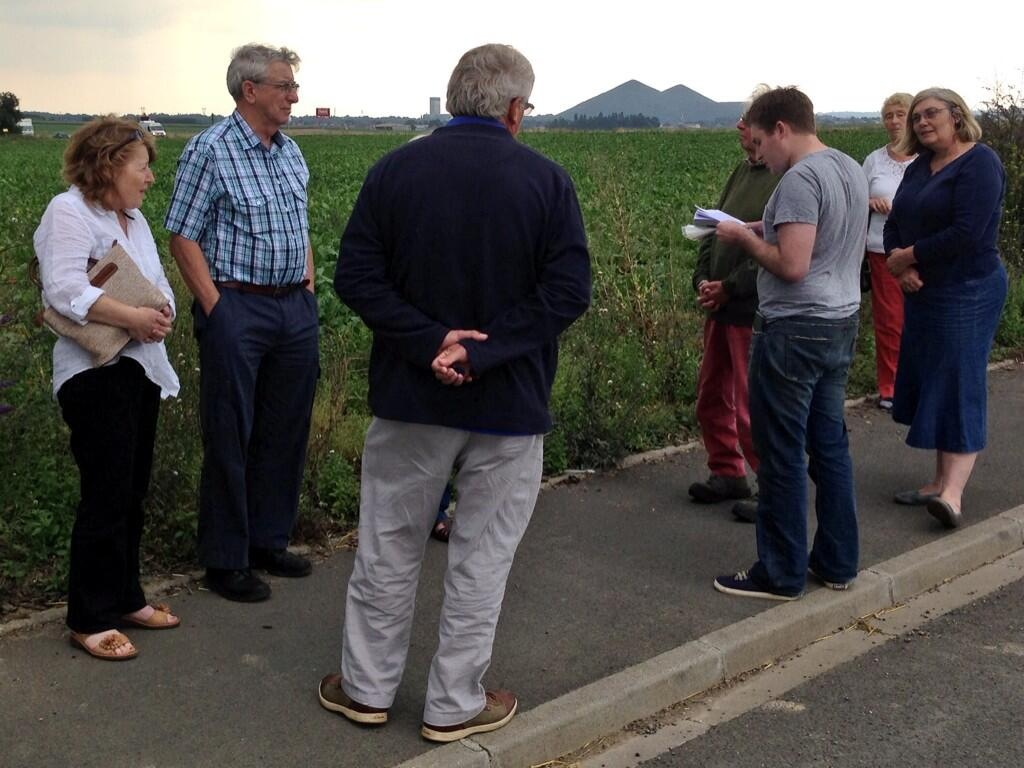 Main Picture: The 'party' about to venture underground into the Wellington Caves. Above in text: Various pictures from the tour. Above: Mark recounts the story of how Sergeant A.F. Saunders won the Victoria Cross, at Loos.
Powered by